Hidden deep in the Sacred Valley, sitting 10,500 feet (3,200m) above sea level, lie these surreal salt mines, also known as Salineras de Maras, dating back to pre-hispanic times. Built on the hillsides and formed into terraces, over 4,500 salt ponds receive a constant flow of mineral-rich water from an underground stream of unknown origin to this day. The salt ponds are locally owned by 600 families who extract and produce the famed salt through ancestral techniques passed on from generation to generation.

Very little is known by historians about these salt ponds that predate the Incan empire. Through evidence compiled, it’s believed that the Wari civilization built the salt mines somewhere between 500 to 1100 AD. When the Inca gained control of the territory, they saw great opportunity in the mines and began overseeing production and expanding further up the hillside. The Inca used the salt to season, store their food, and even for mummification and religious ceremonies. The ownership and administration of the ponds were given to different families that lived in the nearby community, which have been passed on to current generations.

Production of the salt

To this day the production of the salt hasn’t changed and remains as it was 500 years ago. Each pond measures roughly 14 square feet and some vary in shape. When the ponds are full, the stream is closed. Once the water evaporates, the salt is carefully extracted with shovels and wooden rakes by local family members. When all is extracted, the ponds are filled with salt water and the process is repeated again. 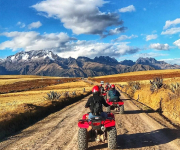 Get your adrenaline pumping by driving an ATV quad bike to the amazing Maras & Moray. 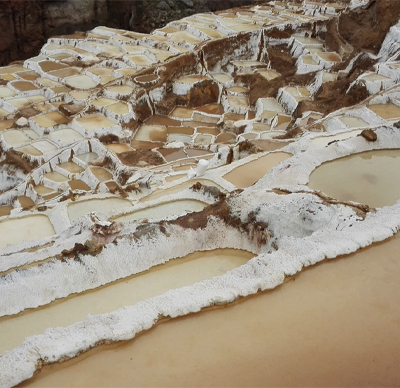 How to get to Maras Salt Mines

Located 32 miles (52km) from Cusco, there are several ways to get to the Salt Mines of Maras.

The easiest and best way is with a tour. You have the convenience of getting picked-up from your hotel/hostel, a local tour guide telling you all there is to know about Maras and finally being dropped back off at your accommodation. And if looking to add more adventure into the tour, there are fantastic ATV Quad Bike Tours to Maras & Moray which will make you enjoy the Incan culture a very different way!

If looking to just go on your own, as the locals would, there are a few more steps. Starting from Cusco, take a colectivo (shared taxi) to Urubamba but let the driver know you’re getting off at Maras. Even though colectivos “set” destination points, you can sometimes ask the driver to let you off in between. Once there, take a 15-minute taxi ride to the salt mines.

Another option is hiring a private taxi driver that takes you to the site, waits for you while you explore the salt ponds and then takes you back to your starting destination. Although it has the benefit of going at your own pace, it is the least popular way as it’s more costly.

Make sure to take a backpack with you, it's more than likely that you'll be buying some fresh salt!