Located in Maras, the Moray Ruins are one of the many important, off-the-beaten archaeological sites left behind by the Inca Empire. Made up of beautiful concentric terraces, dug into a deep bowl, it resembles an amphitheater made with the land. Believed to have been an agricultural laboratory for the Incas, these circular platforms are fascinating and mesmerizing.

History of the Moray Ruins

Known to have been way past their time in different fields of science, it is thought that the Moray ruins were used as an agricultural research station. Each of the platforms served to recreate a series of microclimates and temperatures that were made possible through the arrangement, depth and positioning of the different platforms. Through this, they were able to achieve a difference of up to 59º F (15º C) from the deepest point to the highest point. With these varying temperatures spread across the terraces, the Incas would test different types of wild vegetation, and modify crops to make them suitable for human consumption. Also through the different microclimates, they were able to gain knowledge to later apply throughout the different regions of the Inca Empire. Studies were made of the terraces and evidence shows that the soils were imported from different regions, which further supports the theory of the platforms being used as a testing ground.

Another interesting feat of Moray is that it never floods. Archaeologists suggest that there is an underground drainage system that the Incas built before the terraces to allow the water to drain, protecting the vegetation that were planted. This further showcases the forward thinking and planning behind each Inca creation. 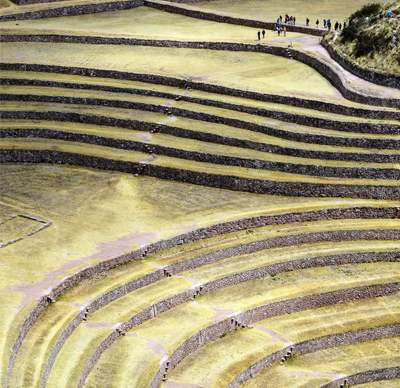 How to get to the Moray Ruins

Exactly like the Maras salt mines, there are several ways to get to the Moray ruins.

The easiest and best way is with a tour. You have the convenience of getting picked-up from your hotel/hostel, a local tour guide teaching you the history and how Moray worked and then being dropped back off at your accommodation. And if looking to add more adventure into the tour, there are fantastic ATV Quad Bike Tours to Maras & Moray which will make you enjoy the Incan culture a very different way!

If looking to just go on your own, as the locals would, there are a few more steps. Starting from Cusco, take a colectivo (shared taxi) to Urubamba but let the driver know you’re getting off at Maras. Even though colectivos “set” destination points, you can sometimes ask the driver to let you off in between. Once there, take a taxi to the Moray ruins.

Another option is hiring a private taxi driver that takes you to the site, waits for you while you explore the ruins and then takes you back to your starting destination. Although it has the benefit of going at your own pace, it is the least popular way as it’s more costly.

The sun is much stronger at high altitudes so it's important to wear sunblock. A hat and sunglasses are also recommended.

When visiting the ruins, temperatures can vary so it's a must taking clothing that's easy to take off or put on.